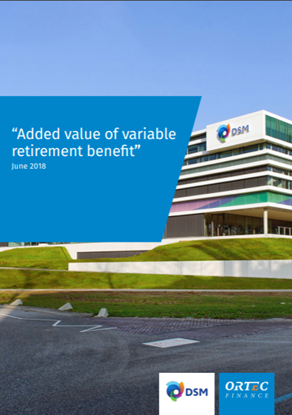 Recently the variable pension law was passed, which allows participants in a premium contract or capital agreement to choose a variable, venture capital pension. Participants who so choose can gradually purchase their pension in a collective, in which they can continue to invest after the retirement date. Also, they can spread risks over time. Stijn Spauwen is the head of the Pension & Actuarial Advice at DSM. For employees who earn more than € 100,000.00 - DSM has a defined contribution scheme, and Spauwen investigated whether the new law is an improvement of that scheme.

At DSM, we implement a net pension scheme with a DC-scheme, in which participants can save. The saved capital can be converted into a fixed annuity ten years ahead of the retirement date. Now it is also possible to use that capital to purchase a variable retirement benefit. Our question was: does such a variable retirement benefit result in a lot of added value for the participant, compared to the fixed allowance that he or she could already buy from us?

General investigations, including by Ortec Finance, showed that the variable retirement benefit certainly has added value compared to the fixed pension that is implemented by an insurer. But even a fixed payment by a pension fund is actually not a fixed annuity, because it can be both indexed and cut. Nor is it invested risk-free in the benefit phase. Together with Ortec Finance, we have tried to objectively compare the two variants, i.e. the Pension Fund variant and the variable retirement benefit, for the net pension arrangement with the specific composition and financial position of DSM, and to see where the added value lies.